What is an Introvert? 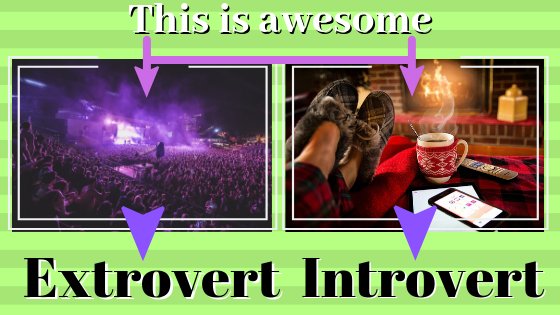 An introvert is a person who enjoys his time alone and avoids social spaces. Such a person has a personality trait that is genetic and stable. An introvert has an innate personality dimension which allows him to seek quiet places away from loud and noisy spaces. It is not to say that introverts are anti-social. Introverts are well aware of social norms and social trends, but they do not feel comfortable taking part in it. Introversion is the opposite of extraversion, where extrovert is the person who enjoys social gatherings and is comfortable in loud and noisy spaces.

Introversion is a term which was coined by Carl Gustav Jung. He was a famous swiss psychologist who was also the father of analytical psychology. He had a close association with Sigmund Freud, who was the founder of psychoanalysis. Initially, the term, introversion, was used for those people who followed their own instincts and beliefs rather than following the trends of the crowd. Carl believed that extroverts get their energy from outside situations and people. Introverts, on the other hand, utilize their energy inwardly on their thoughts and on themselves. The meaning of introversion has adapted and changed over time. Now, it is used more in terms being non-social, withdrawn and reserved attitude.

Introverts may not be easily recognized in social settings because they behave normally in those situations, they are well-aware of their surroundings. Introverts might appear like an extrovert over time, at different instances, but they would always want to seek quiet and peaceful places later on. Introverts might exhibit the qualities of extroverts in particular situation whereas they might act in introverted fashion in other situations. Those people who show qualities of both extrovert and an introvert fall in the middle of the introversion-extraversion scale. Ambivert is the term used for those people who fall under this category. Introverts get easily exhausted from parties and social arrangements, and they need to have time to themselves afterwards. Introverts do not get anxious and shy in the social settings, that is why it might be hard to indicate and locate them in social setups. They tend to have fewer friends and they have a very strong relationship with them. Introverts are more comfortable in socializing with people in small groups. They are very calm and contended with the people they are familiar with and they open up to them.

The Psychology behind Introversion:

Psychologist Hans Eysenck was born in Germany, but he moved to Great Britain to succeed in his career. He was a great psychologist who explained the basis for introversion and extraversion in great detail. He elucidated these concepts in simple terms for the layman to understand. He described why introverts like quiet and peaceful places whereas extroverts seek social interaction. According to him, introverts are easily excited by the stimuli whereas it is hard for the extroverts to be stimulated. In order to compensate the under-stimulation, extroverts tend to engage in activities that will offer the thrill and excitement. There can be two factors that play a significant role in determining whether a person will be an introvert, extrovert or fall in-between this scale. These two aspects are nature and nurture. Both nature and nurture interplay with each other.

There is a significant impact of biology and genetics on personality. Nature along with nurture determines what kind of personality type a person is going to exhibit. Biological and hereditary factors play an important role in determining the characteristics of our personality. A twin study, done in 1956, showed that identical twins revealed that there was greater similarity in personality traits of extraversion than fraternal twins. Eysenck explained that in introverts, there is a high level of cortisol arousal and that is the reason they try to avoid stimuli from the environment. Extrovert, on the other hand, do not have the same kind of cortisol arousal, so they tend to seek stimulation from the outside.

Introversion and extraversion are considered to be opposites. These personality traits lie on entirely opposite sides of the spectrum. Let us help you clarify the differences between introverts and extroverts.

9 Signs of an Introvert: 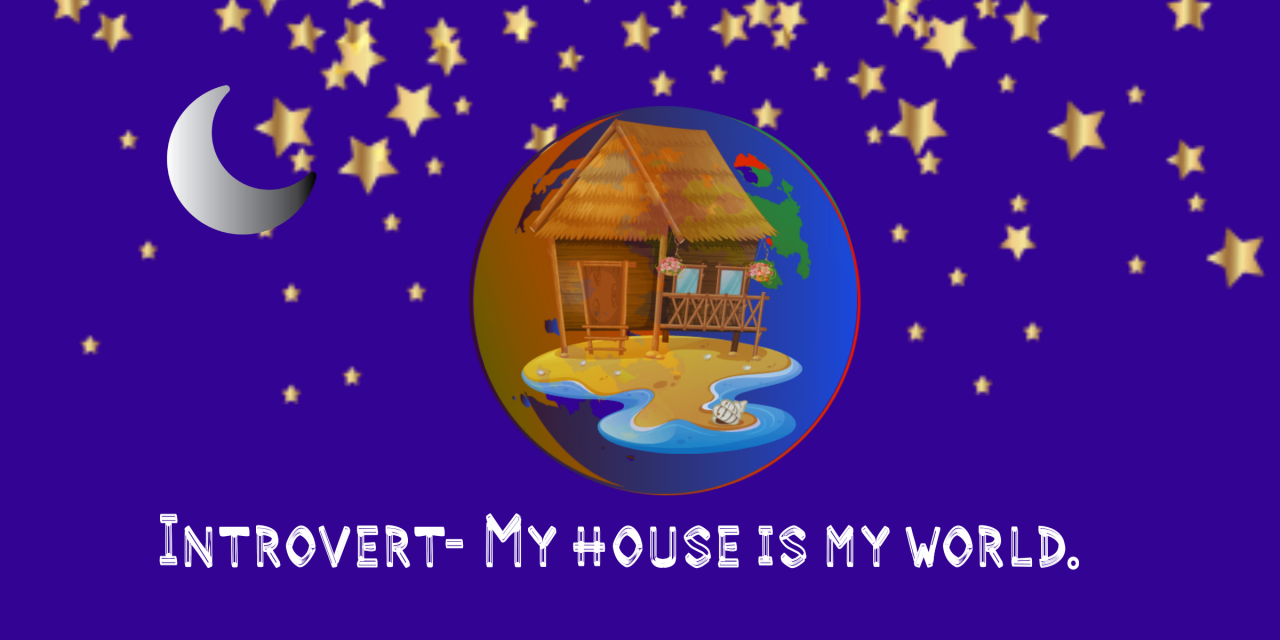 Introverts tend to spend a lot of time on themselves. Their primary focus is their happiness and their peace, which they acquire by directing their efforts on their own thoughts and well-being. They focus on relaxing themselves to restore their energy that gets drained by external stimuli present in the environment. They can spend their valuable time on reading books, watching movies at home, writing, painting, crafting or engaging in any activity that they can do alone.

Introverts are easily overloaded with external stimuli. Introverts tend to spend time alone because they are easily excited by the outside environment. They have high levels of cortisol arousal thus they do not require to be stimulated from the outside. They can get drained very conveniently because of this. They have to regain their energy in order to function properly.

Introverts not only tend to stay at home alone, but they also prefer to work alone. They will find opportunities where they do not have to interact with other people much. They get exhausted by social interaction very easily. They perform best when they are working alone. This gives them the chance to work on the project very attentively and meticulously by producing in-depth and high-quality content.

Introverts do not form many relationships or have many friends. Even though they do not have a lot of friends, they have a few and make a strong association with them. They can count on these people who are close to them. It is very hard for other people to penetrate the walls of introverts that they have built to keep them out. Their social circle is very close, and they do not like to interact with a lot of people.

Introverts are very curious, and they have detailed thought processes. They think thoroughly and very deeply before executing a plan. They work things out a lot, in their mind and, they are very creative about the solutions. They are always keen to learn more about nature and observe their environment very closely.

Introverts tend to spend their energy on themselves. They spend quite a lot of time with themselves rather than other people. They think a great deal about themselves and evaluate their own pros and cons. They are very comfortable spending time alone.

Often times introverts zone out when they are working on something. They have a habit of overthinking everything thus they lose track of the activity at hand. They get lost in their imagination and thoughts. This can act as their defence mechanism as well. Whenever they feel that the situation is out of control and it is chaotic, they tend to escape reality by zoning out from time to time.

Introverts are very sensitive, and they feel very deeply. They might not show or express that they are sensitive, but they are very complicated in their emotions. Studies have shown that they do not feel as happy as extroverts because they tend to overthink and over-feel everything. Another study revealed that introverts are more prone to depression.

Tips for Introverts to feel Happy:

It is okay and normal for introverts to feel down and depressed time and again. They do not need to worry because a lot of people go through the same and they are not alone. We are to here to help you feel happy and live better lives. Introverts mostly lose themselves in order to act like extroverts and they try to enjoy in the company of other people. If introverts do not take time out for themselves then they will feel lost and empty. In order to spend a healthy and happy life, introverts should perform the following activities.

Plan something that you enjoy:

It is very important for the introverts to plan something that gives them pleasure. Since they do not enjoy the activities that mostly extroverts perform, it is necessary for them to plan something of their own that they desire. Introverts can plan on riding a bike and taking a trip, boat ride etc.

Introverts usually lack the motivation to go out and enjoy with friends and keep themselves busy. It is of extreme importance that they set their goals and always struggle to achieve them. Goals should be defined properly, and they should be broken down into smaller goals. It is convenient to tackle smaller goals in order to achieve a bigger goal. This way introverts will feel good about themselves and gain confidence.

You have to let go:

It is very hard for the introverts to let go of things and people. They are known to cling to the old and familiar situations in order to feel safe. It is important for them to get rid of poisonous people and toxic situations.

Introverts have a hard time confiding in people and expressing their feeling. They bottle up all their emotions and start feeling suffocated. Expressing emotions has great significance in making them feel better. We should always be there for the people who need to talk, and we should reach out to them.

Introverts should make an effort and they should try to avoid overthinking consciously because it leads them to depression. They make different scenarios in their head which leads them to astray. Introverts should a healthy activity to keep themselves busy and be productive rather than being consumed by their negative thoughts.

You can learn more here:

We would love to hear from you. You can freely contact me if feel to have conversation with another introvert. We hope that this article helped you to deeply learn more about these concepts and clear out any fallacies that you might have had earlier. Here are the links where you can find more about introversion to quench your thirst for curiosity.

What is extrovert? 10 qualities of an extrovert

6 Ways Your Childhood Affects Your Love Style Our childhood has a profound impact on the things you do later on in your life because your childhood is a place where you usually have the...