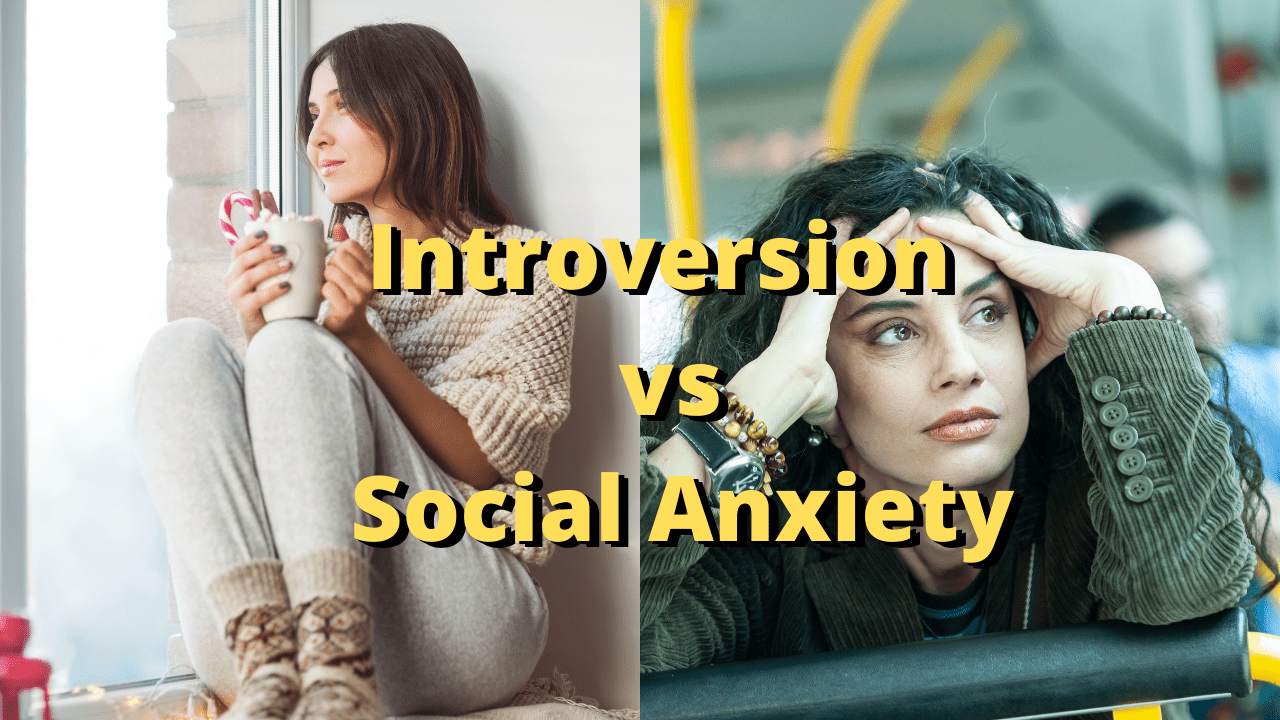 Often people say that they are introverts and they like to be alone. They enjoy being alone or in the company of selective people. They enjoy being at home or at a quiet place. But there are people who say the same things but it is not their personality trait but they behave in such a way for a different reason. That is why in this video we are going to learn about the difference between those who call themselves introverts vs those who have social anxiety.

The word introvert comes from the Latin translation of “introverted,” which means “turning inward.” This is why introversion is described as a feeling where people turn to internal thoughts, feelings, and emotions to deal with these emotions by themselves. Introverts can process everything in their surroundings and pay attention to all sensory details, not just the people around them. These people often have dialogues and feel energized while reading a book, thinking profoundly, or journaling.

While compared to extroversion, the feelings of introversion are deeper. This is because introverts are often always by themselves, and they don’t seem to have any company around them, which makes them have their emotions revealed more strongly to them. Most people are either one of the two, but some characteristics may be stronger of the two regardless of the person being an introvert or extrovert.

There are some everyday habits observed if a person is an introvert. These include being drained by specific social interactions, working alone to focus on the task at hand, spending time with a small group of friends rather than a large group, daydreaming, allowing your mind to wander, expressing yourself through writing rather than talking, seeking meaning in both relationships and interests. These are the prevailing signs of introversion most commonly seen in people who portray introversion. However, many of these signs might be found in people who aren’t dealing with introversion.

Introversion is an innate habit, innate means something that you are born with, as we’ve mentioned before. The degree to which you are introverted can be influenced by how you are raised and other factors in your surroundings. If you are brought up in an environment with few human interactions and one where you aren’t meeting different kinds of people all the time, that could contribute to introversion. On the other hand, you also have over-protective parents who would rather keep their children isolated than send them bad company; this is another case where introversion tends to kick in stronger. The trait is already present inside the person, and this is just a trigger that tends to activate it.

Social anxiety is one of the five major types of anxiety disorders. The fear of social interactions and public interactions such as public speaking, meeting new people, engaging in meetings or classes, going to social events or activities, talking on the phone, expressing opinions, and raising your voice for a cause. Social anxiety occurs when the person has low morale, and it is shot down even further due to related circumstances arising. Social anxiety gives a person interaction troubles where which a person without any social anxiety would not be having.

The following are the most common signs of social anxiety: there are feelings of humiliation or embarrassment, fear of interaction with strangers, over-analyzing your performance, avoiding situations where you may be getting lots of attention, fast heart-rate, trembling, light-headed, blushing, upset stomach, and slight breathlessness. All these signs lead towards a person becoming socially anxious because these contribute to a person becoming low on confidence. When a person is low on confidence, it is ultimately revealed on their outlook when they fail to talk to other people hesitatingly and have difficulties performing the simplest of tasks.

The two are usually mixed up in our society, where social anxiety is considered an extreme form of introversion. This is entirely false. Introversion is about having the energy to be social with people around you. In contrast, social anxiety is diagnosed as an illness mainly focused on the fear of social interactions.

Where introverts would instead prefer isolating themselves from people, they don’t mind if people come around. They have it to sustain a conversation with other people, although they might not share the same enthusiasm in it. On the other hand, social anxiety is where people don’t meet other people on purpose because they’re too scared of saying the wrong thing or doing the wrong acts. Social anxiety is also developed according to your environment, whereas introversion is something that you are born with. The most important is that being socially anxious means you aren’t controlling your life or your life choices. If something comes around that requires you to interact with the people around you, you struggle to do so, whereas, in the case of introversion, you have your life in complete control and know just how to deal with the things at hand. You don’t panic with what life throws at you. The most common behavior in both habits is staying alone, but even that has a difference. Socially anxious people are alone for temporary relaxation, while introverts are alone because it’s their choice!

We hope you have a better concept of introversion and social anxiety now that we’ve gone through them in complete detail!