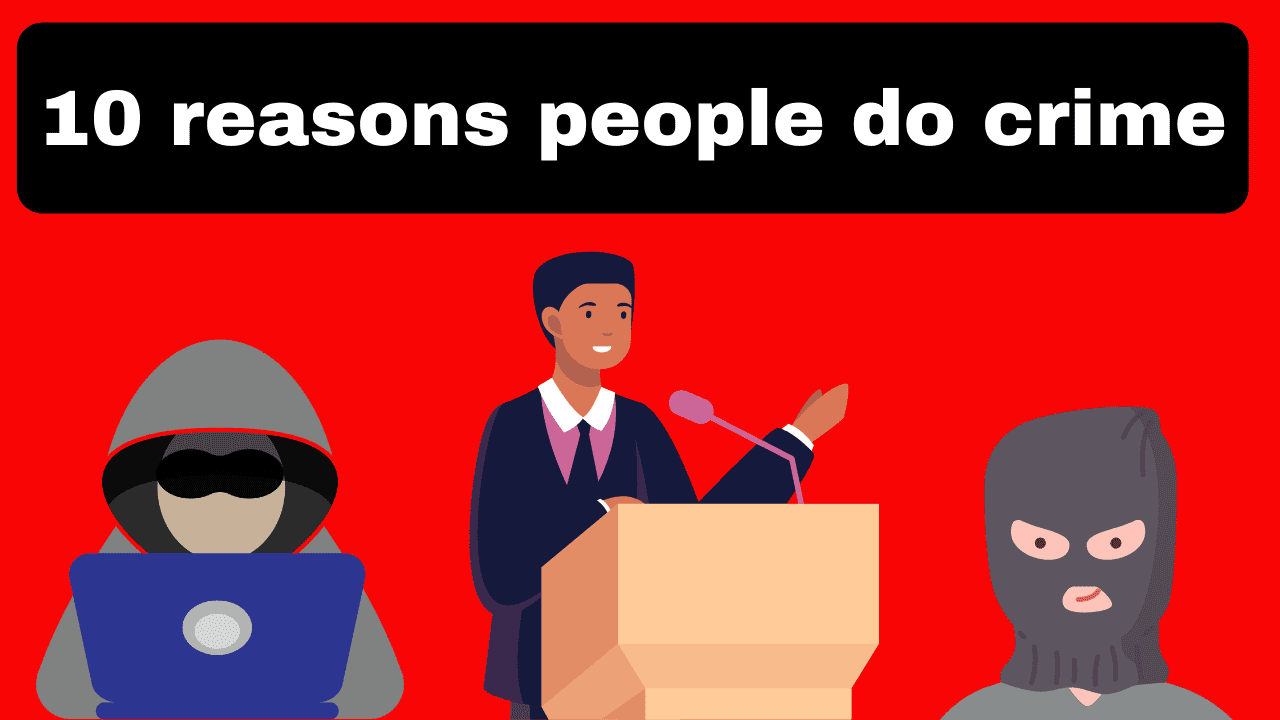 The world of crime is life-destroying. Everybody knows this, yet so many people turn to it just because things go out of their hands. People are very well aware of what result they’ll have if they opt for a life of crime. People still end up choosing routes that will eventually result in their downfall. A life of crime is just like this. Choosing crime is something that you choose personally. Even though you know it isn’t right, yet you still go through with it. There is something inside you that tells you it is wrong but your greed overcomes your morality and before you know it, you’re already involved in crimes!

With so many people being a part of it, have you ever wondered why do these people turn to a life of crime? What are the reasons which they are compelled to do so? This is a pretty extensive list, so make sure you watch till end to know the all the reasons people turn towards crime.

Here are the top reasons people carry out a crime.

The first reason people do crime is that they do not get justice when something wrong happens to them. This takes them to a place where they begin engaging in crimes. Most courts of the law try their best to guide them with the available resources and evidence, but it often happens that an guilty is proven innocent in the court. Since the court does them no good, they believe in taking revenge, and hence, they switch to the darker side of their personality and do wrong with the system.

These people take action by rioting in public, killing members of the government, and making the life of civilians a mess.

The second major reason for high crimes is people being denied their fundamental rights. It is widespread for people to rebel against the system when deprived of the most necessities. They then get loose into the world of carrying out notorious activities and hurting people who come in their way. In smaller communities, it’s normal for people to get in fights over petty matters such as land, property, or wealth. To have their voices heard by the country’s leaders, these people keep on committing crimes to make the leaders realize what their mistakes are.

They cannot have an environment where everybody lives in peace, or allow anybody to live in peace. Especially during election campaigns, these criminals are out of their homes, making life a living hell for people around them. These people hurt other people and destroy public properties.

Of course, everybody will fight with each other when the subject of unemployment is in question. It is a significant factor for many criminal activities in many countries.

It can drive people crazy when they study for years in school and college, and then they still can’t land themselves a job. To fight away this frustration, they turn to a life of crime. This isn’t just something that happens in developing countries, but even in developed countries, this is quite common. People spend a lot of money on their education, hoping for a good job but immediately after they graduate school, they see that the reality is far from different. When young blood engages in criminal activities, they usually destroy their entire lives.

Society should help people grow. Financial growth and mentally and as a society. But the societies of today are far from being perfect. If anything, they are the complete opposite. Only a select few people become genuinely happy in your happiness which is why you shouldn’t be telling everyone about your life’s achievements. Society is conditioned with so much hate, jealousy, and envy that anyone around us who succeeds people immediately looks to bring them down.

So many brilliant lives are destroyed just because they can’t fit into society. Since they don’t get accepted in society, they turn to a life of being a criminal. Being a criminal won’t stop them from doing what they like until a time comes when they will eventually have to bring it to end.

Poverty is a killer. It is something one wouldn’t even want to wish upon their enemies. Poverty sends you down a spiral which is difficult to come out of. The right way takes a lot of effort and will but the wrong way is super easy yet destructive. Poverty causes so many people to choose a life of crime. This is because they find it easy to hurt, rob, cheat and cause pain to others in comparision to hardworking life of integity and dignity.

Whereas on the other hand, greed also plays a huge part. Crime isn’t always carried out by people who are in need of money. Some people just have other motives. Some are hungry for power, some want control, some do it just because they can’t see others living peacefully. A greedy person doesn’t go good for anyone. Be it himself or other people. It almost always ends up in chaos.

One of the hottest topics on which people carry out criminal activities is religion. There are so many religions globally, and billions of people follow different religions. Each religion has different practices and ideologies. When someone thinks or have been brainwashed that one religious practice doesn’t follow in line with another religious practice, then that is where the disagreement brews. It keeps on brewing, and once people have had enough of it, they then attack the other person or group for their religious beliefs. People also use religion to cheat and fool others for own benefit.

They injure other people or even go as far as killing them just because they can’t stand their religion in the same discussion as them. All religions give the lesson of peace somewhere in them, so if we look at things practically, these criminals do not represent any religion.

Some politicians conduct global crimes, but ordinary people seldom realize it. Politicians bend the system according to their will, and they equip the youth with guns and weapons and destructive power to carry forward their dangerous agendas. These politicians hire mobs and pay people to cause tension and riots among the civilians.

They even try to control people’s minds by brainstorming people with their agenda on information channels and social media.

What is it, something that soothes your body but leaves you for dead? Drugs, of course. People carry out crimes under the influence of drugs very frequently. With drugs being available to people more than before, they take those drugs and head out on the streets to cause riots and anarchy. Drugs aggravate a person’s temper and have an impact on their poor lifestyle. With poor lifestyles and the influence of drugs, crimes become common. People then go on and kill other people for drugs too. That is how big of an impact drugs have on a single person. Drugs aren’t the only thing people are addicted to which can lead to crime. Gambling, alcohol and even pornography addicts also engage in social or even in family crimes.

If someone you know is a criminal, help them leave their path and come to the right side. Instead of doing that, many people fall prey to peer pressure. They join their friends and close people in this life of crime because, according to the criminal, a life of crime is rewarding, and as long as you’re not caught, things are perfect. But the same people do not tell about worst side of it and weak minds surrender to their pressure and join them in crime.

So before a situation like this arrives, make sure not to give in to peer pressure because it will leave ever lasting scar on your life.

Most of the times we blame the failed system for giving birth to criminals, but eventually it all starts from home. The first things that you learn about life are from your parents and your family in childhood. If that isn’t something positive then it won’t take time to adopt a life of crime. When people aren’t guided the right way from their home, they go out and rebel against the system to be in control. When that happens, they don’t listen to anyone and go about their business spreading anarchy and making life hard for self and others.